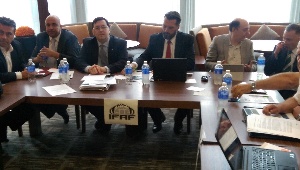 On 17th July the World Congress of IFAF (International Federation of American Football) was held in Canton Ohio (USA).

At the congress, the members confirmed that Mr. Tommy Wiking in the Presidency of IFAF and Mr. Makato Kaneuji is Senior Vice President.

The members elected the following people to serve on the Presidium onto 2016 Congress:

The members voted to put in place a new Ethical framework consisting of Code of Good Governance Policy, Code of Ethics and Conflict of Interest / Confidentiality Policy.

The members also decided that the 2016 Congress will be held in France.

The Presidium would like to tank the members for their support in electing and confirming them and intends to work hard to implement the framework agreed by the members. We believe that this new ethical framework will help underpin its bid for permanent IOC recognition.

The Presidium looks forward to work with all IFAF Members to achieve our goals.