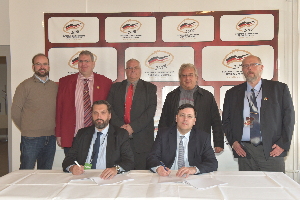 Berlin should be one of the three cities in which the tournament in 2018 will be played according to preliminary plans. The Olympiastadion and the Friedrich-Ludwig-Jahn-Sportpark in Berlin, the Commerzbank Arena in Frankfurt and the Stadion Dresden are the four venues, which convinced IFAF and its European continental branch to award the hosting rights to Germany.

The AFVD and its member clubs combine for approximately 53,000 individual members and form the the largest national organization in American football outside of North America. Thus the AFVD is one of the most profiled associations within IFAF, in which more than 70 national American football federations have joined forces.

The AFVD bid to host the European Championships 2018 was endorsed by the presidium of the Deutscher Olympischer Sport-Bund, Germanys National Olympic Committee and gorverning body of sports. Furthermore it was of particular significance for the IFAF decision in favour of Germany that citiy authorities of Berlin and Dresden as well as the federal states Berlin, Hessen and Saxonia committed to financially and logistically support AFVD in hosting the event, for which a budget in the seven-digit range has been allocated.