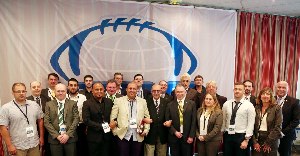 Following a motion of the Austrian national federation AFBÖ the International Federation of American Football (IFAF) on September 17 in Paris along with the new IFAF Statutes adopted a regulation, which allows member federations of each continent to decide on the structure of the organization of their cooperation on that continent. The national federations of a continent may choose either to form a continental committee within IFAF or to run an own legal entity, legally distinct of the IFAF as a whole. Any such entity holds the same rights and obligations as an IFAF Continental Committee, but is enabled to autonomously respond to contracts and has financial autonomy.

The former structure launched within IFAF several years ago had introduced continental committees run solely by IFAF and excluded any other form of continental cooperation. This had severe effects in Europe. Elsewhere in the world where international competitions are held sporadically for national teams, but not on a regular base for club teams, the change in the organizational framework more or less left things unchanged. Even with the transformation of the IFAF structures all continents except for Europe still lack international club team competitions as they did a few years ago.

For Europe, however, where this year marked the 30th anniversary of the oldest international club competition for the Eurobowl and where most of the IFAF member federations with the most broadly based national programmes are located, it was an obvious choice that the European member federations would not hesitate to pool their common interests in an own legal entity. After the new statutes were adopted at the IFAF Congress in Paris, the European federations almost inevitably selected this path to further streamline their efforts for the European international competitions or the numerous educational programmes for countries where American football just is in its early developmental stages. The foundation of "IFAF Continental European Association / IFAF Europe" was unanimously performed by 23 European national federations. It clears the way for the European American football federations to control their own fate in the future.

As President of  IFAF Continental European Association / IFAF Europe Enrique Garcia de Castro (Spain) was elected unanimously. Michael Smith (Ireland) and Sahin Komercu (Turkey) will take the duties of Vice President, Uwe Talke (Germany) perform as the General Secretary and for the office of the Treasurer the convention voted unanimously for Dr. Gregor Murth (Austria). Other functions will be performed by Romeo Tjoe-A-On (The Netherlands) as Director of Sports and by Thomas Ahlberg (Sweden), Manfredi Leone (Italy) and Jedrzej Steszewski (Poland) within the managing committee.