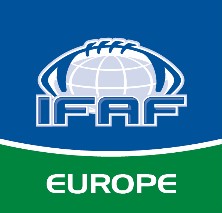 As decided at the IFAF Europe CA Board meeting at February 12th 2017 the Flag Football European Championships consisting of one female and one male tournament was awarded to FEFA.

In the meantime the hosting contract was negotiated and signed by IFAF Europe CA and FEFA.

The playing days of both tournaments will be between 07 and 10 September, 2017 (Thursday to Sunday) at LAS ROZAS, Madrid in Spain.

After a successful 2015 EC Flag in Pinto, Madrid Spain, FEFA offered once again their hospitality and organization for the next EC Flag 2017.

Tournament Director Mr. Fabio Tortosa (who also was a member of the Technical committee of the organization in Pinto2015) is excited and expresses himself already for another successful EC Flag Tournament. Organizational wise; working with experienced federations and their organizations doesnt only makes the job easier but learning from the past creates room and opportunities for improvement and further development. Practical wise: is the pleasant fact of experience for the participating teams and the spectators.

With another European highlight on the IFAF EUROPE sports agenda 2017, it for sure will have its contribution to the growth of the sport.