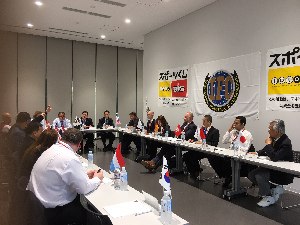 The Annual General Meeting of the International Federation of Cheerleading (IFC) took place on May 14, 2017 at Takasaki Arena, in Takasaki (Japan).

The IFC President Mr. Setsuo Nakamura welcomed the delegates in the brand new competition venue which will be home to the WDSF/IFC Cheerleading World Championships 2017 (CWC 2017) on November 11-12, 2017.

The AGM was held in conjunction with 11th Cheerleading Asia international Open Championships and 4th Asian Junior Cheerleading Championships thus offering the delegates a unique opportunity to see the venue in full operation prior to the upcoming CWC 2017.

The IFC Senior Vice President Mr. Robert Huber introduced to the delegates the progress of the IFC Vision 2020, which follows in the footsteps of the WDSF Vision 2020 thus creating a coherent vision within the general WDSF strategy.

The IFC Vision 2020 encourages the member federations to actively participate in the life of IFC, create more value for its members and also provide new opportunities.

As part of the vision, the General Meeting accepted a new set of statutes which will create a new working structure for IFC as well ensure more active participation.

A new Cheer Dance category was unveiled at the AGM and was enthusiastically received by the delegates. The new category will be included as part of the official competition programme starting from the Cheerleading World Championships 2019.